How did a mammogram as a screening tool fail me?

Don’t be DENSE! read this lifesaving crashcourse on Breast Density

From the Susan G. Komen for the Cure website

Recorded July 1, 2009 – less than a month after my diagnosis and 2.5 weeks before my second surgery.

What is mammographic density? 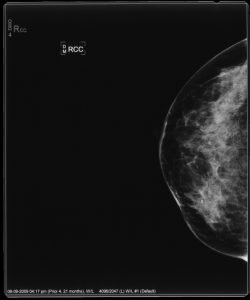 Henda’s mammogram with a 4cm tumor. Small titanium ribbon was implanted before breast surgery to mark the location of the tumor. 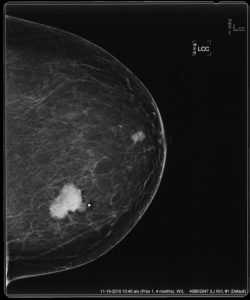 Low density breast clearly showing a tumor on a mammogram. 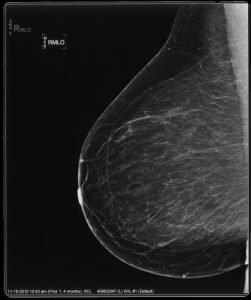 How does dense breast tissue look on a mammogram?

Mammographic density (MD) only describes how breasts look on a mammogram. It isn’t a measure of how the breasts feel, and it cannot be determined in a clinical exam by a doctor. Although breast density varies from one woman to the next, younger women and women with smaller breasts are more likely to have dense breasts. For a lot of women, breasts become less dense after menopause.

The level of MD can be scored or rated by radiologists along a scale from mostly fatty (very low density) to mostly dense tissue. One of the most commonly used scales is the American College of Radiology’s Breast Imaging Reporting and Data System (BI-RADS), which radiologists use to classify MD on mammograms along a scale of 1-4:

How does mammographic density affect your risk of breast cancer?

Cancers can sometimes be hidden or ‘masked’ on a mammogram image if the breasts are very dense. On a mammogram, fatty tissue appears as dark, and glandular and connective breast tissue shows up as white, or ‘dense’. Cancers also show up as white, or bright, on a mammogram. This means it is harder to pick up cancers on mammograms of dense breasts than mammograms of mostly fatty breasts.
Research also shows that breast density can itself be a risk factor for developing breast cancer. For the approximately 40 per cent of women who have ‘heterogeneously dense breasts’ (Type 3 on the BI-RADS scale), the risk of developing breast cancer is thought to be 1.2 times greater than average. Women with extremely dense breasts (Type 4) are 2.1 times more likely than average to develop breast cancer, and up to 6 times more likely than women with mostly fatty breasts.